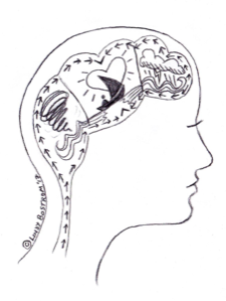 THE INTUITIVE BODY is formed over time. By repetition of behaviors we have become increasingly familiar with carving repetitive pathways in our gut. They are not always to our benefit. For instance, if our gut tensed up when we were children as we faced a certain traumatic situation, we may continue this tensing pattern into our adult lives; perceiving simple, not even necessarily disturbing situations, as similar traumas. Very often this results in a condition commonly referred to as IBS. A simple intuitive reaction has now become a lifelong physical malady, often incurable.

The emotional body too is formed by repetitive patterns. Typically the emotional body is concerned only with things, situations and people we have a reactive relationship with. These reactions can categorize into one of two: liking (desire) and disliking (aversion).  When out of balance, the reaction is almost always condensed into fear, anger and grief. Once this is shared with the intellect, it is further colored by thought patterns, ego needs, and sensory needs as they begin to appear and get added into the soup of our existence. All of this can transform into lust, rage, arrogance, delusion, jealousy and greed, the enemies of our wellbeing.  In fact, they are only different guises of our wanted and unwanted attachments gone sour.

If our mind is like an ocean of milk, we float in contentment, peace, and tranquility. But once churned, it froths, breaks up into harsh waves, emits noxious poisons and forms dark clouds that prevent us from seeing the beauty in our lives. Thoughts, feelings, sensations, fantasies all run through us, sometimes cheering us to greater giddy heights of ecstasy but more often into tormented states we try very hard to numb, sedate or control; so it seems, at least on the surface, that we are leading very normal lives in a very normal world.

This fantasy is always subject to disruption by reality and that causes us much emotional pain and suffering.

In Sanskrit there is no single word that describes emotion. And in modern medical parlance, there is much debate but no precise consensus yet. With much contemplation, I have come to the understanding that an emotion is a latent energy that has been activated and now we have difficulty finding the shut off switch for. It is thus really only a disturbance in the ocean of milk that begins to flow in our hearts, travels through our sense channels to all cells of our body and is processed in the gut and the brain. The waves of creation, innocence and joy that we originate from, tremor into practicality, rationality and desires for happiness: only a shadow of our original state of abiding joy and innocent creativity!

Is it possible to survive this assault and find our way back to our original nature, assuming  of course that there is such a thing? For most of my life it seems I struggled with my insecurities, staying safe in the shared belief that we all have them. Along with them came a false sense of entitlement and the promoting of personal agenda in almost all exchanges, relationships and activities. A closing of the portals of the heart, if you will. But there was also this underlying unease that all of this was not real. That there was a different reality built of peace of mind, of compassion and caring, of being without my IBS. Yet for most of the time this also felt like just a comforting thought/dream/delayed reality while the games went on. Including the numbing, the sedating and the controlling.

It is sheer laziness to not pursue a vision once you have it. And if the vision is of your own nature, after a while there is no excuse left not to chase that vision down, pin it to the ground in a bear hug and fiercely whisper: “you are mine”.

What I found is that this is hard work but it is also exhilarating. Seeking out answers that literally affect every neuron in our brain, learning to watch as we malfunction and knowing that while the storm is on, there is not much we can do, but that adding drama to it is life threatening. That when the storm abates, we can go right back to work, fixing things up and adding new pieces to the puzzle board and that we are indeed capable of moments of complete lucidity so that even a few of those moments in this work can take on all of our drama and win.

I have come to understand that we are so much grander than we can conceptualize, that we can astound ourselves (as with the belief in the scientific world) that we have more neural connections than atoms making up our universe! That a Buddha can acknowledge us never being able to know the extent of all possibilities but that we already have all the knowledge we need. That is correct. All we need is not only within us already but it is accessible.

We just have to allow safe passage for the accurate signaling between the brain (intellect) and the enteric brain (intuition) as they pass through the turbulent seas of our emotional mediating heart. The storms at sea do pass at moments and those moments allow us to learn how to navigate the next storm. And as each storm passes, it allows of a lesser intensity for the next one.

Emotional intelligence is a safe sea for passage back and forth between the trade ships of intention and willpower on the one hand and logic and clarity on the other. We can learn to navigate when the seas are calm and to rest in the harbor when they are turbulent. And we can create an internal environment where violent seas no longer arise.

One of the graces we are bestowed with is neuroplasticity, which means we are capable of altering our behavior, our appearance and our life experiences. It is a grace we often overlook in our relationship with our past. We forget that what we characterize as past mistakes are only ignored messengers we have learned nothing from. Once learned from, they leave us alone. The repetition of experience that causes us to ask, “why does this keep happening to me” is answered best by “how else could it be?”  In a logical world, chaos is defined as missing the connections because of time gaps, lack of awareness and a fundamental disconnect between reality as it is and reality as we experience it. If we wish to experience something other than fear, anger and grief we have to turn the coins over for the opposites to appear. The missed messenger was only karma and because we reacted to it, it will return again. Reality in our life is what we have created; there is no other creator.  Worshipping some higher force as a creator is not worship, it is simply passing the buck.

Worship is the acknowledgment that there is a bigness that encompasses you and you arise within it, you will cease within it and every thing you do affects it just as much as it affects you. Yet, when we align with it, magic happens.  There is great safety in being held by this bigness. But we do not need to be subserviently grateful. Its job is to hold us. The mystery of life is that magic is of two types: trickery and beyond the ken. We get to pick our magic. Mine is in watching a flower bloom. Of watching an elephant walk alongside my car on a crowded street of India alongside dogs, cows, pigs and goats that jostle for space among the bicycles, motorcycles, auto-rickshaws, cars and buses interspersed with humans on foot, dodging and darting between it all. Magic here is how it all works: this chaotic existence microscoped into one tiny street further enlivened with aromatic smells and colorful visuals from billboards to saris. None of it is special on its own; it may even be completely mundane. But in the kaleidoscope it shines.

The connections between instinct and logic must pass through the colors of the hearts’ emotional state. To achieve a fulfilling life, one must become responsible for the management of emotions as they arise, shift, and then cessate.  For like life itself, emotions are unavoidable. One word for emotion in Sanskrit is rasa. Juice. Plasma. Essence. Taste. I believe this properly defines the potential as well as the failings of our emotional body. And the importance of it to every aspect of our existence. Rasa is the link to our primal existence and the key to our future wellbeing.